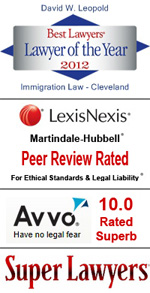 Our national immigration practice focuses on all matters related to US immigration, visa and citizenship law.  We represent large corporations, health care institutions, small companies, innovators, entrepreneurs, families and individuals from across the nation and around the world.Our clients include:

David Leopold is the past national president of the American Immigration Lawyers Association (AILA) the Washington, DC-based premier bar association for immigration lawyers and professors in the US. He has served as AILA’s general counsel and the association’s liaison to the Department of Homeland Security’s key enforcement agencies. Mr. Leopold lectures throughout the country on immigration law and policy and writes regularly for the Huffington Post and The Hill CongressBlog. His pieces have appeared in other online and print publications including,The WonkRoom.com, MediaMatterscom, FOXNEWS.com, and AILALeadershipblog.org. Mr. Leopold opinions and analysis appear frequently in national print and electronic media including, The New York Times, The Washington Post, The Los Angeles Times, USA Today, Miami Herald, CNN, MSNBC, ABC News/Univisionand FOX News. He has earned Martindale-Hubble’s highest AV rating, is listed in The Best Lawyers in America and has been named an Ohio Super Lawyer. Mr. Leopold directed the United States Immigration Law curriculum as an Adjunct Professor of Law at Cleveland’s Case Western Reserve University School of Law as well as at the Cleveland-Marshall College of Law at Cleveland State University.

THIS IS AN ADVERTISEMENT. This information is provided to you solely for informational purposes and is not legal advice. Transmission of this information does not create, and receipt by you does not constitute, the formation of an attorney-client relationship. Any on-line readers should not act upon any information contained in this website without first seeking advice from a qualified attorney.